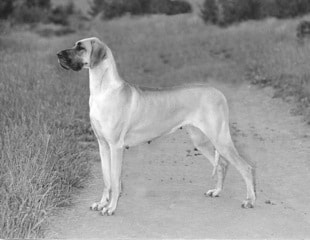 The Garsak kennel was founded back in 1985 by Gary Hooker & John Lockey. Over this past 35 years we have gained the honour, of which we are so proud, to become the second most successful Great Dane breeders of all time in the UK.

April 2017 we achieved our 26th champion, winning our 199th CC and after which we achieved a further two CC`s, litter sister bitches, who both took BOB with these awards. This brought our total to 201, with 36 Great Danes carrying the Garsak affix having gained the honour of being awarded CC.
There is no single thing to which we would attribute this phenomenal success. However, our foundation bitch, Ch Grand Fawn Fauna of Garsak, Magda, has to take the lion share of credit. This amazing bitch gave us 10 champions, almost equally split dogs to bitches. Magda was a truly outstanding brood bitch, producing champions to three different stud dogs. So she really was goose who laid the golden egg.
We were complete novices when we had the opportunity to get Magda, who was imported from the Grand Fauns kennel with her litter brother, who was also a good producer. To be honest Magda was quite an ugly duckling, who blossomed not only into a beautiful example of the breed, but she had the most amazing personality.

We have memories of going to Sweden to collect Magda and Buck, who went on to   Ann Foxwell,  Auldmoor, to whom we owe so much. Ann took us under her wing and from Ann we learned so much. It was because of Ann’s friendship with the famous Airways kennels that we were given the opportunity to own Magda.

The first sighting of Magda was quite a shock. She was 14 weeks old, very long and rather thin, not at all showing signs of greatness. We now know that this is possibly the worst age to access a Dane puppy. Ulla Magnuson reassured us and we set off back to the UK to make history.
Magda had, to our mind, a very good outline, with a good topline and lovely long crested neck. She was an elegant bitch, and we have to attribute the cementation of elegance in our lines to this. At the time we also had a brindle dog Sir Ken, who we thought would add strength to this elegance..

This mating was a complete outcross. Our feeling that this combination would complement one another was confirmed. All quite simplistic really. With gut feeling we went ahead. From this mating we produced the = 4th dog winning Great Dane, Ch Garsak Sir Galahad. This was a very even litter with other titled dogs and bitches including our own Ch Garsak Summer Breeze. Three champions in our first litter, this is easy. So we thought!

The mating was repeated, and this time we produced 2 more champions and a male with 1cc.

The third mating  and to us probably the best. Again using our simplistic approach we looked around for a stud dog. We had always been drawn to the males sired by Ch Samani Desert Chief. One such dog who we were attracted to before we owned a dane was Ch Ambassador Auldmoor, bred by Ann Foxwell and owned by Jennie Robert, Arondyke. Jennie also became a great friend and influence. Ambassador was no longer being around, we selected a dog bred by John Hunter, Khunrth I`m Troillus, more about Troillus later.

So how do we select a stud dog? This process starts with the assessment of the strengths and weaknesses of the brood bitch. What we want to improve upon and what qualities we do not want to dilute. We would always want to maintain a clean and flowing outline, and to maintain elegance with strength. We do aim to breed towards the breed standard.

The stud dog has to excel in the area of any weakness of the bitch. We also look at the history of the stud dog. What has he produced? What did the parents and grand-parent look like? And what have they produced? There have been stud dogs who may not have been prolific winners in the ring, but we have admired the parentage and temperament.  One such dog being Troiluss who produced a litter with Magda, with two male and one female champion. There was also another stunning bitch in this litter , who from a confirmation perspective was every bit as good as Ch Garsak Summer Rain, but didn`t quite have the attitude. She was a useful brood bitch producing the beautiful bitch Ch Garsak Blaze who went on the win 28 CC`s and many groups. Although only one litter was produced out of Blaze two CC winning danes, one being the well-known Ch Garsak Sir Alfie, who was a very successful stud dog, producing the beautiful Ch Garsak Jodie,  Ch Garsak Sir Ferdinand and group winning  Ch Garsak Morning Sun. Also two champions for the Jaydania kennel, Ch Jaydania Fred Asstaire and Ch Jaydania Henry Fonda.

Magda confirmed to us the importance of the qualities of the brood bitch to a kennels success. If you think about this from a logistical point of view, a kennel can take their brood bitch almost anywhere for a prospective mating. The increase in AI matings opens the world for prospective stud dogs.

Not wanting to get into a debate on the merits, or otherwise, of AI matings, it has to be said, we do like to get our hands on, and meet any prospective stud dog. It is a bit difficult to assess a dogs temperament from a picture or video.

We have tender to use and outcross at the right time, then come back into our line in a subsequent litter. Our experience has been that we have been marginally more successful when we come back towards our lines. Maybe as kennels have become smaller the options the options to line breed are not so frequent, therefore careful slection of an outcross is even more crucial to maintaining type and quality.

We feel as a kennel to be successful you need to also be on the lookout at what other kennels are doing and producing. One such kennel that caught our eye was the Turlum kennel. We admired the strength and size, so we bought a bitch from them. Unfortunately she died young and we were never able to do our planned mating. Turlum were kind enough to replace her, this time with a male. Ch Turlum Trailblazer to Garsak.
Travis turned out to be a great show dog and a very good producer siring many champions. He was top stud dog one year, siring the then breed record holder. Ch Myhalston Mr Malachi for owner breeder Owen Greechan.

Easy really, we just want it all. Style, type, attitude and conformation.

The best advice I would give to any newcomers or those wanting to progress in this wonder breed is:
* Get to know the breed inside out
* Watch every class and study the dogs
* Ask questions, it’s the only way to learn
* Have your own mind but keep an open mind
* Don’t get caught up in camps, it’s great, but can also suffocate you
* Talk about mistakes and be honest, we all have them
​
And remember the Perfect Dane has not yet been born, So don’t give up!

With our current girl Ch Garsak Adaption, the Top Winning Bitch for 2017 & other exciting youngsters currently in the ring having just gained their Titles, we eagerly look forward to what the future holds ….
​